Whatever you expect from croquet, prepare to be surprised! Here you'll find a new hobby that is both fun and stimulating, with constant opportunity to improve and engage in new ways.

Because of the nature of croquet, anyone can play anyone without any disadvantages, regardless of age or sex. It is widely played in the UK and around the world, with competitive tournaments and large communities forming around the game.

It is a skilful, strategic sport, based on accuracy and planning. It is played to different levels, and the two variants of the game offer distinct playing experiences. These two variants, both played at HWCC, are each played with four balls that are paired into teams.
​
​

Association Croquet is the more complex variant, and players take long turns that can last up to half an hour. Players make tactical use of different manoeuvres that offer extra shots, normally using all four balls in each turn. Each ball in play has to go through all of the hoops, and to the peg at the centre of the lawn.
​
It can be played as singles or doubles, and play lasts from one to three hours. 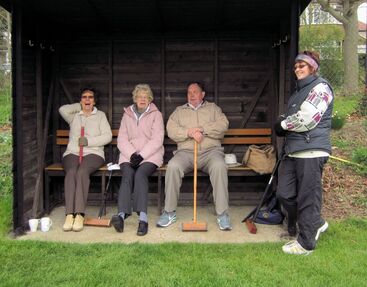 Golf Croquet
​
Golf croquet is equally tactical, but has a simpler set of rules. Play tends to move much faster in this variant and it is played 'hoop by hoop', meaning that once a hoop is won by one player all players move to the next one.

It can be played as singles or doubles, and each game tends to last between thirty
​minutes and one hour.
The Croquet Association

Croquet in England is governed by the Croquet Association. You can find more information about croquet, how it is played, and its history, by visiting their website. They were involved in the formation of HWCC in the 1980s and have provided valued support and grants as the Club has developed..
​