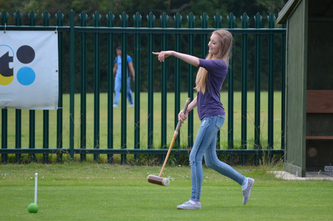 Croquet is a sport which requires physical skill and strategic ability. Unlike many sports, croquet can be played by young and old, male and female, on an equal basis.

​Croquet is played on a grass lawn 28 by 35 yards (about the size of two tennis courts), on which there are 6 hoops and a central peg. The game is played by two teams which can be singles or doubles, and each team has 2 balls. The aim of the game is for one team to hit their balls through all the hoops in the correct order and then hit the peg, before the opposing team.

The game of croquet is governed by the Croquet Association, which recognizes two principle forms of the game: Association Croquet and Golf Croquet.

Both of these are played at High Wycombe Croquet Club.
Some of our members play in club competitions, local leagues, and tournaments in the UK and even abroad. Other members prefer just friendly games and club sessions. 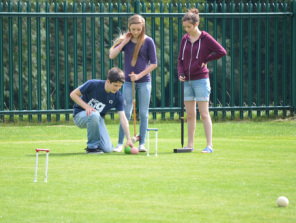 Association Croquet involves getting extra turns in reward for hitting another ball or running a hoop. This provides for a richness of tactics and a wide variety of types of shot to play. Good players can make 'breaks' as in snooker, sometimes hitting a ball through (‘running’) many hoops in one turn.

Golf Croquet is a simpler form of the game, but still involves a great deal of skill. It is perhaps particularly suitable for when you have limited time, as games tend to be shorter and (if you haven't played before) the tactics and rules are a bit more straightforward to understand.

For more details see our How to find and contact us page.